KANSAS CITY, Mo. — Friends and family of a 13-year-old boy who died Saturday morning when a U.S. Post Service Mack tractor-trailer crashed into the car he was riding in held a candlelight vigil Monday night in his honor.

Kenta Summers dreamed of becoming a pro-football player. He was headed to a football game at Ruskin High School when the truck crashed into the car at about 8:30 a.m. at the intersection of 18th and Benton in Kansas City, Mo.

Police determined the postal vehicle, traveling eastbound, collided with a Chrysler passenger vehicle, which was traveling southbound. The intersection is a four-way stop controlled by signs.

Thomas Moore, 10, was Kenta’s best friend. They were together in the car, along with their two little brothers and coach, who is also Kenta’s stepfather.

“Everybody saw the truck, but we thought it was gonna stop and then that’s when it had hit us and everything went black,” said Thomas, who suffered a serious gash on his forehead. 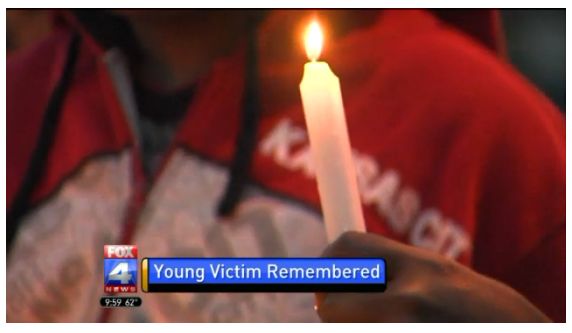