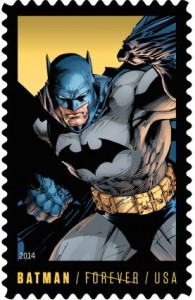 WASHINGTON and BURBANK, Calif., Sept. 29, 2014 /PRNewswire/ — The U.S. Postal Service, in collaboration with Warner Bros. Consumer Products and DC Entertainment, is proud to announce that Batman, one of DC Comics’ most beloved characters, will be immortalized in a Limited Edition Forever postage stamp collection.

The first-day-of-issue dedication ceremony for the Limited Edition Forever Batman Stamp Collection Set will take place in “Gotham City,” at 10:30 a.m., Oct. 9 at the Javits Center to kick off New York Comic Con 2014. 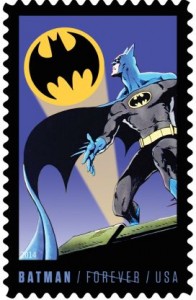 In honor of Batman’s 75th anniversary as the protector of Gotham City, he will join the elite ranks of American pop-culture icons that have been given this honor. The stamp collection will feature multiple images of the Caped Crusader from artistically distinct periods across his comic book history, exhibiting the evolution of the Dark Knight over the past seven-and-a-half decades.

“The U.S. Postal Service has a long history of celebrating America’s icons, from political figures to pop-culture’s most colorful characters. We are thrilled to bring Batman off the pages of DC Comics and onto the limited edition Forever Batman stamp collection, marking his place in American history,” said U.S. Postal Service Chief Marketing and Sales Officer Nagisa Manabe. 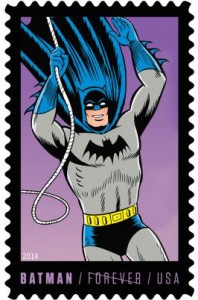 “Over the past 75 years Batman has captured the imagination of fans around the world — from comic books to television, film, video games and beyond,” said Jim Lee, renowned comic book artist and co-publisher of DC Entertainment. “Today Batman is more relevant than ever and his popularity continues to expand, reaching the generations to come in the next 75 years and beyond.”

Showcasing eight unique designs in a pane of 20 stamps, the Batman Limited Edition Forever Stamps celebrate the 75th anniversary of the Super Hero. The set includes Batman depicted from the four eras of comic book history as well as the four incarnations of the famed Bat emblem: 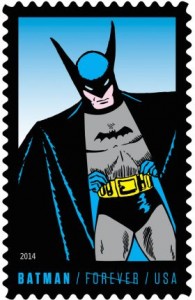 First appearing in the comic book Detective Comics #27, which hit newsstands March 30, 1939, featuring artwork by Bob Kane and a script by Bill Finger, Batman emerged from the shadows to become the one of the world’s most popular Super Hero and dominate media. In feature films, television shows, radio, video games, publishing and merchandise, this most human of Super Heroes has battled some of fiction’s greatest villains using his intellect, cunning and an arsenal of gadgets to further his quest for justice.

These stamps chronicle the evolution of the character, from his origins to present day. Batman spans generations fighting for justice in the pages of the comics, on the silver screen, and in the imaginations of fans across the world.

The Batman Limited Edition stamps are being issued as Forever stamps and always will be equal in value to the current First-Class Mail 1-ounce price. 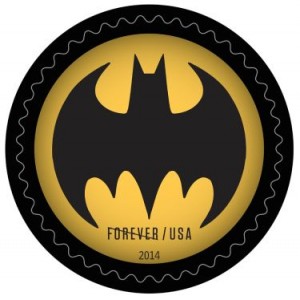 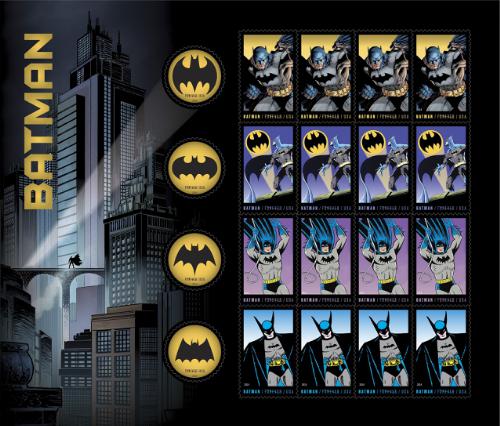