On September 9, 2014, the NPMHU and its sister unions (APWU, NALC and NRLCA), along with a business coalition that employs over 7.5 million American workers in the mailing industry, wrote a joint letter to the Senate Appropriations Committee requesting that the Committee place language in the appropriations bill freezing for one year the USPS plan (January 2015) to consolidate or close 82 mail processing plants.

This letter was a direct response to correspondence previously sent to the Committee from Senators Carper and Coburn. 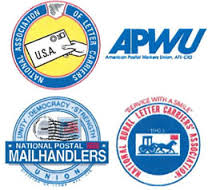 In August, 2014 a bipartisan majority of the Senate wrote to you in support of including language that would impose a one-year moratorium on plant closings and consolidations by the U.S. Postal Service, pending enactment of comprehensive postal reform, in the CR you are drafting. In response, last week Senators Tom Carper (D-DE) and Tom Coburn (R-OK) voiced their opposition to the inclusion of this language arguing that it does not solve the real problems facing the Postal Service, stating that the Senate should enact S. 1486 instead. On behalf of business and labor, we disagree.

As business and labor organizations that represent the American mailing industry, which employs 7.5 million American workers, we do not agree that the solution is to enact S.1486. While we acknowledge the hard work and honorable intentions of its authors, the Postal Reform Act of 2014 is a deeply flawed bill would raise postage rates on businesses and slash services and jobs unnecessarily, which is why it has failed to garner broad support in the Senate.

In our view, there is a better way. Over the past year, we have worked to build consensus around a business-labor alternative plan that would restore the Postal Service to financial stability and pave the way for innovation and growth. Our plan draws heavily on the best portions of S. 1486 and offers sensible, responsible and mutually agreeable alternative reforms to the service cuts and price hikes. All of these alternatives are based on the best practices of the private sector. We have discussed this plan with Chairman Carper and Sen. Coburn and with some members of the Homeland Security and Governmental Affairs Committee. In addition, we are actively working with other senators who have expressed interest in the introduction of this plan during this session of Congress.

Our industry coalition plan will build the Postal Service of the 21st Century by repealing the exigent rate increase, making future rate increases moderate and predictable, and resolving the crushing retiree health prefunding burden. It would also preserve existing service standards, help the Postal Service take advantage of the e-commerce boom and a recovering direct mail industry, and allow USPS to adapt to meet the evolving needs of America’s businesses and citizens. Gradually dismantling the Postal Service’s invaluable networks and charging more for less service is not a viable business strategy.

As the Appropriations Committee considers the moratorium issue, its members should know that there is a broad consensus in our industry that S.1486 is not the answer. We believe the Senate should take the time to consider the consensus approach we have developed — instead of embracing more service cuts that negatively affect us all.

– Submitted by the following organizations: