While a clear majority of US Senators, including Majority Leader Harry Reid have signed a letter asking the Appropriations Committee to impose a temporary moratorium on USPS plant closures, Senator Tom Carper, co-author of the 2006 PAEA law which created the postal service’s financial “crisis”, has chosen to side with Republicans and oppose the moratorium: 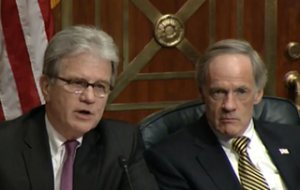 Carper’s opposition to the moratorium is a bit peculiar, since he and right wing Republican Tom Coburn of Oklahoma have co-authored a postal “reform” bill that includes a two year moratorium on plant closings. The Carper-Coburn bill however, also includes provisions that would allow the USPS to negotiate an end to pension coverage for new employees, and would end postal workers’ participation in the Federal Employee Health Benefits Plan as it currently exists. Instead of selecting from FEHBP plans and rates available to all federal employees, Carper’s plan would segregate postal workers into a set of “postal-only” plans that would supposedly be “actuarially equivalent in value to those policies that [insurers] offer for other federal employees who receive FEHBP coverage”. Eligible retirees would be required to enroll in Medicare parts A, B and D.

In addition, Carper’s bill would allow the USPS to eliminate Saturday mail delivery, and would mandate the end of door to door delivery for businesses and new residences.

Correction: This post has been edited to clarify that the Carper-Coburn bill does not remove postal workers entirely from FEHBP, but does limit their participation to a separate set of “postal only” health insurance plans.