The USPS Marketing folks are still having problems with their stamp publicity gimmicks. Last month Linn’s Stamp News reported that a USPS web site had posted the names of the five celebrity chefs to be honored with stamps later this month: 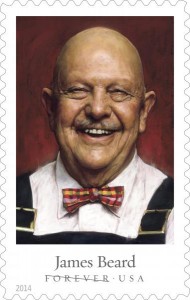 Pictured here is the Beard stamp. The Postal Service will reveal the other stamp designs through social media outlets leading up to the first-day ceremony in Chicago, Ill.

The five stamps will be issued in a pane of 20. The selvage area has a photograph of a large plate set on a white linen tablecloth.

The U.S. Postal Service removed the names and information for four of the five chefs from its website after Linn’s story appeared online.

Today, the USPS stamp blog posted an item featuring an image of the James Beard stamp, and asking readers:

Can you guess the other four chefs who will be featured on the stamps?

So far, no one has responded…