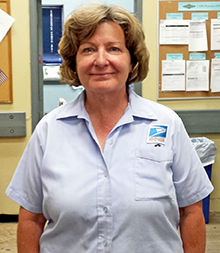 Bronx, NY, Letter Carrier Kathleen Conrad suspected something was wrong when a customer wasn’t waiting to collect her mail, as usual. The woman, who is in her 90s, often told Conrad that seeing her is a highlight of the day.

Conrad was unable to find the building’s superintendent, so she went back to the customer’s apartment and banged on the door while neighbors called 911. Emergency responders arrived within minutes, knocked down the door and found the woman curled up on the floor. She had fallen the day before and was too weak to stand or call for help.

Emergency responders took the woman to the hospital, where she was treated and later moved to a rehab facility.

Conrad finished her route and didn’t mention the incident to co-workers or supervisors. Later, when other tenants came to the station to thank Conrad for her heroism, her colleagues gave her a round of applause.

Bronx Customer Services Manager Patricia Henry commended Conrad. “We earned a lot of respect from the community,” she said. “They all appreciate the carriers checking on customers, especially the elderly.”