Last month we told you about the impending retirement of Tom Priddy, the postmaster of Bedford, Indiana. According to the story in the local newspaper, Tom was the “last politically appointed postmaster in the country”. Recently, however, a reader pointed out that the US Postal Service’s list of “longest serving postmasters”, includes one who was appointed in 1949, and is apparently still on the job.

Record of postmaster appointments in Redig SD. Note that Edgar was preceded as postmaster by his mother, who succeeded his father. (Click the image to enlarge)

Edgar S. Kumley was appointed postmaster of Redig SD in 1949, when Harry Truman was President. USPS records showed that he was still in the position at the beginning of this year. It’s possible that the Bedford newspaper was confusing “politically appointed” with “presidentially appointed”. As we pointed out last month, until 1971, most postmasters were appointed by the President with the advice and consent of the Senate. The exceptions were postmasters of small fourth class offices, who were appointed by the Postmaster General. Redig was a fourth class office when Edgar was appointed- so he was appointed not by President Truman, but by the Postmaster General of the day, Jesse M. Donaldson. (Postmasters General in those days were themselves political appointees- Donaldson’s predecessor was the Missouri politician responsible for getting Truman the vice-presidential nomination in 1944. Donaldson, interestingly enough, was the first Postmaster General who came up through the ranks, having started as a letter carrier in 1908.)

So while Edgar wasn’t appointed by the President, he, like any other postmaster at the time, would have been considered a political appointee. 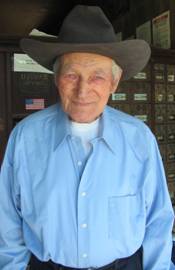 Edgar Kumley does not know exactly when he was born — the hospital records were lost in a fire decades ago — but he knows it was when Woodrow Wilson was in the White House, in 1919 or 1920.

Kumley remembers entire families during the Dust Bowl, walking westward across the prairie while carrying all their possessions. “We would take them in and feed them, and the next morning they were on their way again across the gumbo,” he recalled.

Although it isn’t mentioned in the USPS bio, you were likely to see a Kumley behind the counter even when Edgar wasn’t there- his wife Elizabeth, who passed away in 2009, was, according to her obituary, the “assistant postmaster”. (I suspect that means she was a PMR).

So it looks like we have new contender for the “last politically appointed postmaster”. If you know of another possible candidate, let us know in the comments!