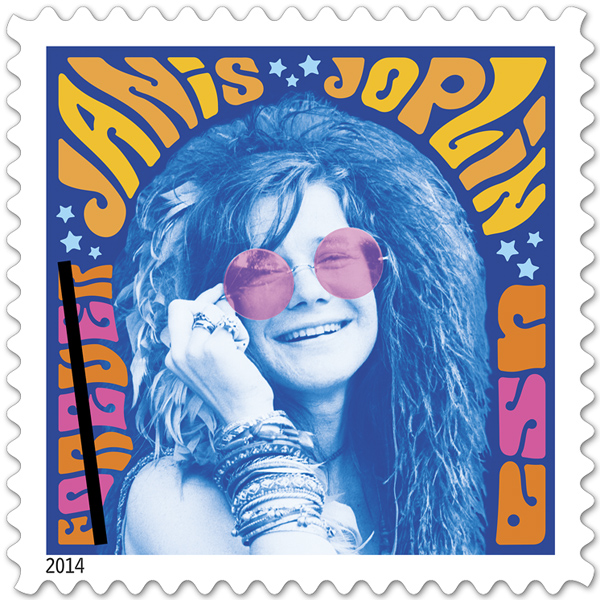 “Today we salute an American original, Janis Joplin,” said Megan Brennan, chief operating officer and executive vice president. “I am honored to dedicate this stamp to pay tribute to one of the most important musicians of the 20th century.”

The Janis Joplin Forever Stamp is the fifth in the Postal Service’s Music Icons series. Through the power of stamps, Joplin joins a list of celebrated artists so honored: Lydia Mendoza, Johnny Cash, Ray Charles and Jimi Hendrix.

“The recognition of her legacy and persona on such a permanent and iconic symbol as a United States postage stamp is truly humbling and it fills us with joy and pride,” said Michael Joplin, Joplin’s brother, who attended the stamp dedication ceremony.

“I am happy for Janis that her image stands strong, representing the power, artistry and independence of women, said Joplin’s sister, Laura Joplin, in reflecting on the issuance of this stamp. “As a rock and roll icon of the turbulent 1960’s era, Janis’s inclusion helps remind us of the positive strength of an era devoted to peace, love and — as Janis said — “Be True to Yourself.”

The ceremony paid homage to the iconic singer with performances by Mary Bridget Davies, from the critically-acclaimed Broadway play A Night with Janis Joplin, and Outside Lands performers Kacey Musgraves and Nicki Bluhm. SiriusXM Radio DJ, Jim Ladd, served as master of ceremonies.
The artwork for this stamp was designed by Art director Antonio Alcalá of Alexandria, VA, and features a June 1970 portrait of Janis Joplin taken in New York City by renowned music photographer David Gahr.

The original black and white photograph is rendered in shades of blue, with Joplin’s trademark round sunglasses tinted a dark shade of pink. The words “Janis Joplin,” along with the “Forever” denomination and “USA” appear in psychedelic-style script reminiscent of the 1960s, in shades of gold, orange, and pink. Small blue stars pop out from the stamp’s dark blue background.

The stamp pane evokes the appearance of a vintage 45 rpm record sleeve. One side of the pane includes the stamps and the image of a sliver of a record visible at the top. A photograph taken by noted photographer, creative director and designer Bruce Steinberg of Queens, NY, in May 1968 at the First International San Jose Pop Festival, and the logo for the Music Icons series appear on the reverse side, along with the words “Janis Joplin Blues, Rock, Country, Soul, Folk.”

Customers may purchase the Janis Joplin stamps as a pane of 16 at usps.com/stamps, the Postal Store, at 800-STAMP24 (800-782-6724) and at Post Offices nationwide. This stamp and a variety of other stamps and related collectibles are available at ebay.com/stamps.

Janis Joplin was a groundbreaking singer whose powerful, bluesy voice propelled her to the pinnacle of rock stardom. An icon of the 1960s, she was known for her uninhibited and soulful performances. Joplin is now recognized as one of the greatest rock singers of all time, as well as a pioneer who paved the way for other women in rock music.

Joplin broke onto the national music scene at the Monterey Pop Festival in 1967 and was known for her rebellious public persona. Her time at the top, however, was brief. She recorded three hit albums and performed at Woodstock. The album she was recording at the time of her death, Pearl, went on to cement her reputation as one of the greatest rock singers of all time. “Me and Bobby McGee,” written by Kris Kristofferson, became the second posthumous no.1 hit in history after Otis Redding’s no. 1 hit, (Sittin’ On) The Dock Of The Bay.

As the years passed, Joplin’s legacy was increasingly recognized. She was inducted into the Rock and Roll Hall of Fame in 1995 and received a Grammy Lifetime Achievement Award in 2005. Rolling Stone included Joplin on its list of 100 Greatest Artists. Some of her most popular songs include Piece of My Heart, Ball and Chain and Cry Baby.

Customers may view many of this year’s other stamps on Facebook facebook.com/USPSStamps, Twitter@USPSstamps, Pinterest pinterest.com/uspsstamps, Instagraminstagram.com/uspostalservice or on uspsstamps.com, the Postal Service’s online site for information on upcoming stamp subjects, first-day-of-issue events and other philatelic news.

Ordering First-Day-of-Issue Postmarks
Customers have 60 days to obtain the first-day-of-issue postmark by mail. They may purchase new stamps at local Post Offices, at The Postal Store at usps.com/shop, or by calling 800-STAMP-24. They should affix the stamps to envelopes of their choice, address the envelopes to themselves or others and place them in larger envelopes addressed to:

After applying the first-day-of-issue postmark, the Postal Service will return the envelopes through the mail. There is no charge for the postmark up to a quantity of 50. For more than 50, the price is five cents each. All orders must be postmarked by Oct. 8, 2014.

Ordering First-Day Covers
The Postal Service also offers first-day covers for new stamps and Postal Service stationery items postmarked with the official first-day-of-issue cancellation. Each item has an individual catalog number and is offered in the quarterly USA Philatelic catalog, online at usps.com/shop or by calling 800-782-6724. Customers may request a free catalog by calling 800-782-6724 or writing to:

Philatelic Products
There are 15 philatelic products for this stamp issue:

Please Note: For broadcast quality video and audio, photo stills and other media resources, visit the USPS Newsroom at about.usps.com/news/welcome.htm.

Follow us on twitter.com/USPS and like us at facebook.com/USPS. For more information about the Postal Service, go to usps.com and usps.com/postalfacts.

For more information on Janis Joplin, go to janisjoplin.com and facebook.com/janisjoplin.

About Outside Lands:
San Francisco’s Outside Lands Music & Arts Festival began in 2008 and takes place annually in historic Golden Gate Park. With an incomparable vision for marrying food, wine and music in a fashion unlike any other festival in the country, Outside Lands has become one of the most popular summer events for both the culinary and music enthusiast alike. It is a welcomed and beloved world-class tradition in its hometown, as it is now known as the event that celebrates in grand style all the things that make the Bay Area one of the most desirable places to live and visit. In its first six years, Outside Lands has raised over $8.3 million dollars for the San Francisco Recreation and Park Department, and, while honoring Northern California’s spectacularly diverse culture, it has set a new standard for live events worldwide.