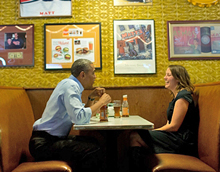 Letter writing has received an endorsement from the commander in chief.

President Obama went to Minneapolis last month to meet Rebekah Erler, a Minnesota mother of two who wrote to him about her family’s financial struggles.

“I’m pretty sure this is a silly thing to do, to write a president,” Erler’s letter began.

After meeting with Erler in a restaurant, Obama penned a message of his own, saying he hopes more people will write to him. “It’s not a silly thing at all. It means so much to me to read your letters,” the president wrote.

Obama concluded his message with a post script: “You can send it by mail, too. You might even know the address already: 1600 Pennsylvania Ave. NW, Washington, D.C.”

Every day, White House staffers choose 10 letters to the president and forward them to him to read. Obama plans to visit more letter writers this summer, according to the White House.