Updated September 9, 2014– According to news reports, the Tarrant County Grand Jury declined to indict Jackson for fatally injuring the dog. The US Postal Service had no comment.

The Fort Worth Star Telegram has more:

FORT WORTH — A Tarrant County grand jury on Tuesday declined to indict a postal worker accused of bludgeoning a Yorkshire terrier with a rock, a decision that left the dog’s owners angry and dissatisfied.

“We’re upset,” said Lawrence Brown Jr., one of the owners of the 4-year-old, 10-pound dog named Maxwell. “Number one he did it, number two he told me he did it.”

The Browns rushed Maxwell to an emergency clinic in May, where a veterinarian told the couple that the Yorkie had a shattered skull and severe spinal cord injury and couldn’t be saved, so the dog was euthanized, Lawrence Brown said.

In June, Fort Worth police issued a probable cause arrest warrant for Ricky Eugene Jackson, a mail carrier who Brown said told him he felt threatened by the dog and was protecting himself. Maxwell was not on a leash and was across the street from the Browns’ house in the 3600 block of Hazeline Road when he was injured.

Jackson was facing a felony charge of animal cruelty.

“He was familiar with our animal, he’s been to our home before,” Brown said. “I’m not really understanding a lot of it. It’s like he got away with murder.” 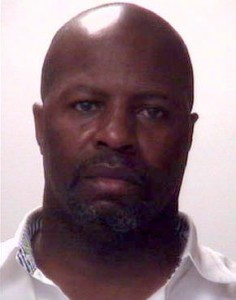 A North Texas mail carrier has been charged with animal cruelty after a family’s pet, allegedly hit by a rock, had to be euthanized.

Fort Worth police said U.S. Postal Service worker Ricky Eugene Jackson turned himself in at the Tarrant County Jail Thursday afternoon. He was later released on a $3,500 bond.

Dog owner Lawrence Brown said his Yorkshire terrier named Maxwell had to be euthanized after being found critically injured May 17. Brown has said his pet apparently wandered across the street and then he heard the dog howling.

“At the time, I didn’t know it was my wife’s dog. I just heard a loud yell,” Brown said. “So when I looked at the postman as he was walking up the street, I asked him, ‘What did you do to that dog?’ He said, ‘I got me one.'”

It was then that Brown went across the street and learned from his neighbor that it was his family’s dog the mail man had been talking about.

Jackson has been on paid leave since the incident.