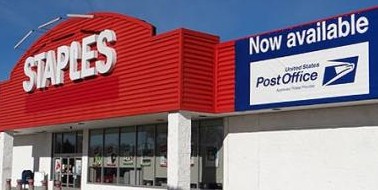 In what appears to be a rather cynical attempt to buy the allegiance of public school teachers, Staples says it will donate a million dollars to fund classroom projects. The announcement comes as teacher organizations have joined protests across the country against Staples’ partnership with the US Postal Service, which seeks to replace career postal workers with minimum wage temporary employees.

From the Boston Globe:

Staples Inc. said Thursday it will donate $1 million to DonorsChoose.org, an online charity that provides funds requested by teachers for classroom projects.

In a press release, the Framingham company cited a recent survey that found 75 percent of parents of teens believe a shortage of school supplies is a “significant challenge for schools.” Staples said teachers shell out an average of $408.71 from their own pockets on supplies for their classrooms each year.

Staples also said Thursday that it is sponsoring the North American leg of Katy Perry’s Prismatic World Tour and offering fans a chance to win a free trip to meet the singer in Los Angeles by creating videos about how education has impacted them.

Teachers are an important group of consumers for the retailer because of the vast amount of supplies schools and educators purchase every year.

The new donation is being made at a time when teachers unions in several states are joining forces with US Postal Service workers to boycott the office supply chain.

The postal workers are upset that Staples offers comprehensive mail services at 82 of its stores. The unions say Staples and leaders of the postal service are taking jobs away from government workers and trying to privatize mail service.