Jersey Post, the postal service for the English Channel island of Jersey, is marking the 70th anniversary of the D-Day invasion with a set of six stamps depicting the military operation, which took place a few dozen miles away on the Normandy mainland. 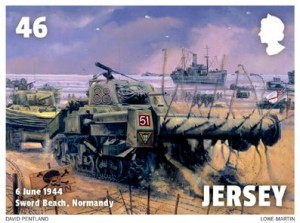 Under the codename Operation Overlord 150,000 soldiers of the Allied Forces of Britain, America, Canada, and France attacked German forces on the coast of Normandy, France. This famous World War II campaign became known as D-Day, or the Invasion of Normandy and the cross-Channel operations which placed all naval issues under the command of Admiral Betram, were given the name Operation Neptune. The landings commenced on 6 June 1944. In preparation for the invasion, the Allies had amassed troops and equipment in Britain whilst increasing air strikes and bombings on crucial strategic targets in order to hinder the Germans’ progress across Europe. With the advantage of the light of a full moon, the attack began shortly after midnight with an airborne assault during which paratroopers landed behind enemy lines to destroy key targets and capture bridges. Then, thousands of planes dropped bombs on German defences and warships began to bombard the beaches from the sea. Meanwhile, the main invasion force of over 6,000 ships carrying troops, weapons, tanks and equipment approached the beaches of Normandy.

American troops landed at and took Omaha and Utah beaches; the fighting at Omaha beach was particularly fierce and many US soldiers lost their lives. British and Canadian troops landed at Sword, Gold and Juno Beach. By the end of D-Day over 150,000 troops had landed in Normandy, pushing their way inland to force the Germans out of France. By 17 June 1944, over 500,000 Allied troops had arrived and D-Day was remembered as being a key turning point of World War II in Europe.