Last week’s announcement by GOP leaders in the House that the US Postal Service could fund highway projects across the country is so bizarre that even the Heritage Foundation calls it “absurd”:

At least one conservative group, Heritage Action for America, has already come out against the idea.

“The idea Congress would use a supposedly self-funding agency that cannot pay its bills as a piggy bank to fund another bankrupt, self-funding fund is absurd,” said Heritage spokesman Dan Holler. 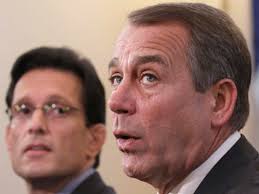 In case you missed it, the House GOP leadership plans to fund the depleted Highway Trust Fund for a year by taking $10.7 billion from the US Postal Service. Yes, the same agency that the GOP has been calling “bankrupt”, and that supposedly owes the Treasury tens of billions in defaulted “trust fund” payments- that US Postal Service. John Boehner and Eric Cantor say that the USPS could come up with the money (over the course of the next ten years) by eliminating Saturday mail delivery.

Here are a couple of questions that Washington reporters should be asking- but haven’t:

The problem with the Highway Trust Fund is that it relies on fuel taxes set over twenty years ago. Those taxes don’t provide enough cash to maintain and improve our infrastructure. In a nation run by grownups, the solution would be simple- either raise those taxes (something even the US Chamber of Commerce is in favor of), or find another tax funded federal program that can be eliminated or reduced.

That of course, would require some intelligence and some courage- something the current House leaders obviously have none of.

via Postal Service Funds Would Go to Highways Under House GOP Proposal – NationalJournal.com.