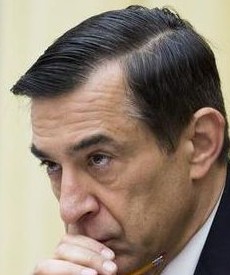 I should clarify right at the outset that this story is apparently real, not something from The Onion, or Andy Borowitz. The story comes from “The Blaze”, the site that is home to creatures like Glenn Beck, and which today features a story headlined “Woman Claims She Was Ordered to Stop Dancing Because She’s White”. No, really- it’s not The Onion! You can tell, because the white lady dancing story is written with a complete lack of irony.

Anyway, The Blaze’s story has actual documentation attached to it, detailing how Congressman Darrell Issa, who was recently deprived of his favorite toy (the Benghazi witch hunt), has decided to replace it with an investigation into the investigation into the deaths (or non-deaths) of several protected birds during a tree trimming operation at a post office.

Let me repeat- this is not a parody- this is real:

Rep. Darrell Issa (R-Calif.) on Wednesday launched an investigation into the U.S. Fish and Wildlife Service’s attempt to bring criminal changes against a California tree trimmer.

In early May, Ernesto Pulido was hired by the U.S. Postal Service in Oakland, California, to cut a few tree limbs. Birds were sitting on the limbs and defecating on the mail trucks.

Now Darrell can’t actually announce that he’s doing this because someone else has been assigned the task of keeping BENGHAZI!!! in the headlines until the elections, so he came up with an alternate justification:

Issa criticized the FWS’s actions, in particular because of the many examples Issa’s committee has seen of government deciding not to prosecute other government agencies. He cited activities such as watching pornography on the job

Which of course makes perfect sense.

via Issa Looks to Save Tree Trimmer from Criminal Charges after Cutting Limbs for the Post Office | TheBlaze.com.