Update: After we posted the following item, we heard from the official @USPS twitter account, informing us that original tweet didn’t really mean that mail could be delivered as late as 10 PM, because the item in question wasn’t mail (in the view of @USPS), but a package. @USPS also tells us that when they told the customer that her package could arrive as late as 10PM, they didn’t mean that it should arrive that late- they were simply passing on the info that “some customers have reported receiving packages that late”. Even though that isn’t what their original tweet actually said. Scroll down for the whole exchange!

You may recall that last Friday we shared an official @USPS tweet that informed a customer that the package she was waiting for could be delivered as late as 10 PM- here’s a screenshot of the tweet: 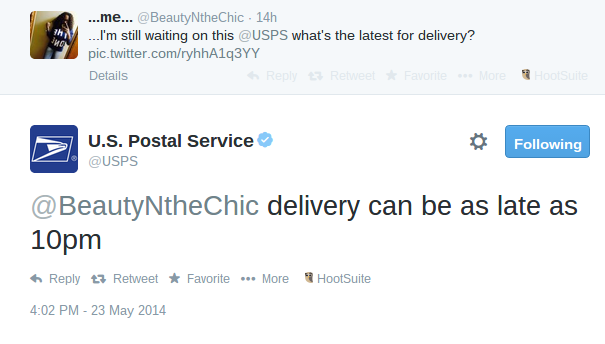 via A knock on the door at 10PM? It might be your mailman! | postalnews blog.

Update: After we posted this item, we heard from the USPS via twitter:

Ummmm… OK, so what does that mean?

@postalnews late as 10pm, however that is not standard procedure

@postalnews some customers have reported receiving packages that late, so you should correct your post.

Oh. So apparently when a customer asks USPS when she can expect a package to be delivered, @USPS tells her what other customers have reported, rather than what the USPS service standard is?

@postalnews your article is also a misrepresentation in that you said MAIL can be delivered as late as 10pm, we informed the customer that

@USPS so to clarify, you no longer regard packages as mail?

We haven’t received a reply to our question about packages no longer being considered mail.