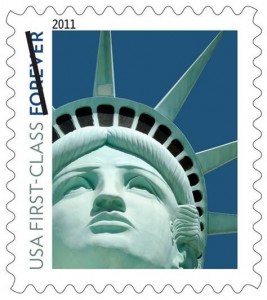 Quick- where is this famous statue located? If you said New York Harbor, you’re not even close. The Liberty Forever stamp, issued this past December, actually features an image of the replica Statue of Liberty located outside the New York-New York Hotel and Casino in Las Vegas. Linn’s Stamp News revealed the mistake on the cover of its April 25 edition. Linn’s notes differences between the original statue and the one pictured on the stamp. The image was licensed from Getty Images, and the keyword information attached to the photograph includes “Replica Statue Of Liberty – Las Vegas”. Apparently the folks who designed the stamp missed that part, because the press release that announced the stamp says “Lady Liberty, as the Statue of Liberty is affectionately known, is shown in a close-up photograph of her head and crown taken by Raimund Linke. The statue, located on Liberty Island in New York Harbor…”